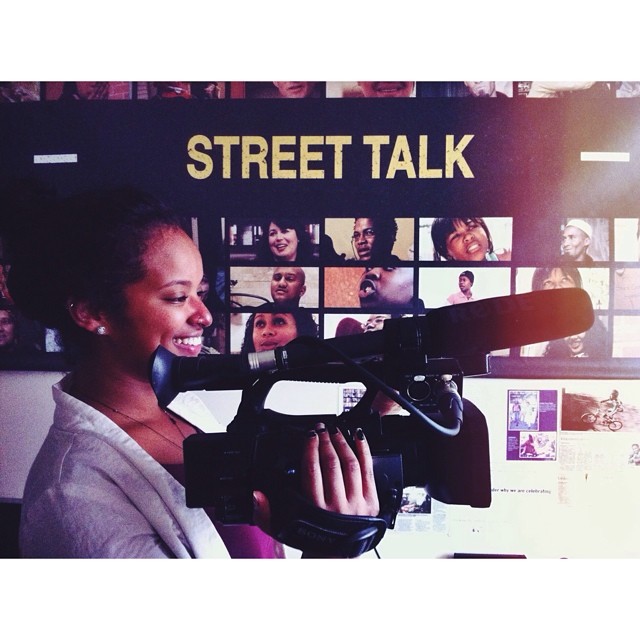 Habesha LA sits down with journalist and recent USC graduate Lensa Bogale on her experience interning in South African network Street Talk TV. USC’s Annenberg School of Communication and Journalism is currently ranked the #1 journalism school in the nation.

Habesha LA: Tell us a little bit about your background: where did you grow up? Interests growing up? Role models?

Lensa Bogale: I was born and raised in Seattle, Washington. My family lived in a lower-income area until I was about nine years old and then we moved to a suburb in Kent, Washington where we lived until I went off to USC. As a kid I was obsessed with books and storytelling. I was constantly reading or designing comic strips based on the mundane life struggles of a 6-year old. Later on, that obsession turned into a passion for films and acting. It was then I started performing theatre at the Seattle Children’s theatre. I didn’t discover my passion for broadcast journalism until college. That’s when I realized that I could combine my love of storytelling and film into one entity. I appreciate my parents for allowing me to be myself. They knew they had bred a child that was creatively oriented; I had no interest in math or science and they were okay with that. I recognized this was a rarity, especially from Ethiopian parents. It was a good feeling knowing that people I admired most were fully supportive of my passions.

HLA: Tell us about your experience studying journalism at USC.

LB: The Broadcast program at USC is no joke; it is very rigorous, but I wouldn’t have it any other way. Although, it was demanding it was simultaneously very practical. The set up of our media center was identical to that of a real newsroom. Also, the program allowed me to explore all aspects of Broadcast: Television News, Radio news etc. I never felt limited. The courses required students to report, film, and edit. Students are given the opportunity to work in front as well as behind the camera; it’s amazing. I composed dozens of packages during my time at USC, which wasn’t easy and I hated it at times, but as a result I feel more confident and well equipped for the real world of broadcast journalism. It’s the perfect experience for aspiring journalists.

HLA: How did you secure your internship in South Africa?

LB: I expressed to a journalism professor at USC that I was interested in interning aboard over the summer. She recommended that I apply through an internship program called Connect 1-2-3. I did just that, I applied to/interviewed with the program, which then helped connect me with various television networks in Cape Town. From there, I submitted my resume and interviewed with multiple networks. I ended up selecting a network called Street Talk TV, a television series that produces mini-documentaries. They go behind closed doors to capture the realism of life in South Africa. It aligned perfectly with what I am passionate about.

HLA: What were some of your most memorable moments in South Africa?

LB: I retained so much more from my experience in South Africa than I initially expected. Honestly, my primary motivation for going was gaining a resume boost and furthering my academic experience, but I ended up falling in love with the people and the culture. The television program I interned with would create mini-documentaries about controversial social justice issues happening in South Africa. This allowed me to better view South Africa through the lens of its natives. I loved hearing people’s stories. Racial division is prominent in South Africa; apartheid ended only 21 years ago. Therefore, I was able to hear a 30-year olds experience in apartheid as child in comparison to an 85-year-old lifelong struggle in the regime. My racial classification also changed. I was classified as “coloured” as opposed to “black”, which is an experience I’ll never forget. I was spoken to in coloured Afrikaans, asked if I was from Mitchell’s Plain (a coloured township) and met with confusion when I told people I identified as black. It was a reminder that race is genuinely a social construct and plays a huge role in how we view and define ourselves/one another.

HLA: As an Ethiopian, would you ever do professional work in Ethiopia?

LB: I would love to do professional work in Ethiopia. I know that experience would be very personal. There is no feeling that compares to being in Ethiopia. I feel so connected to the depth of who I am: my roots, my culture, my family, etc. It is an experience a lot of Ethiopian-Americans take for granted. So, to fuse that with my professional life would be euphoric; it would be combing all my passions into one experience. I genuinely believe more Ethiopians should consider working in Ethiopia at some point in their lifetime. Through this, we can develop professional connections that would enable us to build a large network to support/assist one another in obtaining professional work, kind of like an Ethiopian LinkedIn.

HLA: What are your plans for the near future?

LB: My ultimate professional goal is to report internationally. More specifically, I am interested in documentary journalism; the daily news is great for personalities who love a face-paced work environment that challenges you to be time efficient. However, I enjoy spending a significant amount of time on one story. Documentary gives me that opportunity, to delve deep into the background of a story’s characters. I also hope to encourage more people in our community to explore their creative talents; it’s an area that deserves more exploration and tapping into. I know so many Ethiopians that are afraid to pursue their creative aspirations due to the stigma surrounding artistic professions. However, with brave individuals pioneering the way combined with platforms like HabeshaLA, I believe this new generation can demolish that stigma and we can witness Ethiopians succeed on all ends of the professional spectrum.